PT. EJIP Participate in the Clean Up Action at World Cleanup Day (WCD) 2019 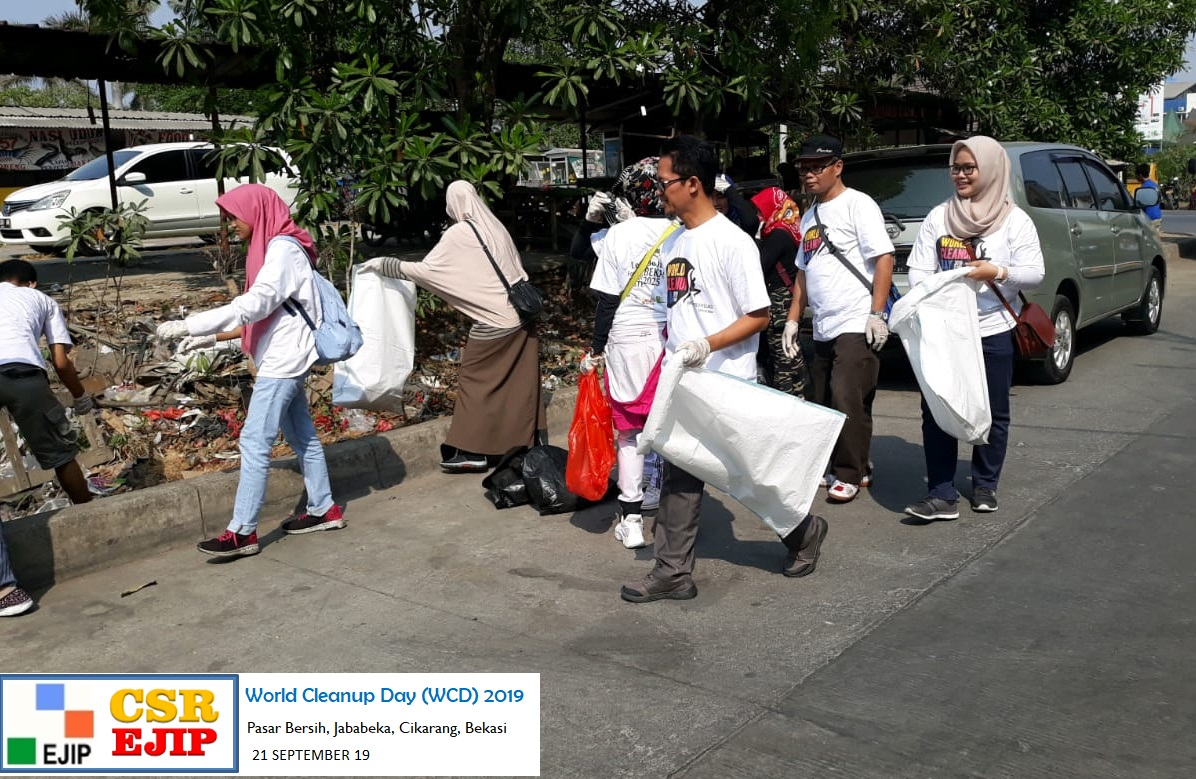 September 21 is celebrated as International World Cleanup Day. This event is used as an activity to clean up trash in the surrounding environment and is carried out simultaneously in 157 countries. Indonesia was not spared from being a country that participated in this clean-up activity. PT. East Jakarta Industrial Park, located in the Cikarang Industrial Estate, took part in a clean-up action at the 2019 Bekasi Cleanup Day World Cleanup Day. The activity took place around Pasar Bersih, Jababeka, Cikarang, Bekasi on Saturday (9/21/19).

This activity was initiated by the Ecovillage Network (Jangkar Ecovillage), supported by the Bekasi Environmental Office (Dinas Lingkungan Hidup Bekasi), as well as several companies and environmental lovers communities in the Bekasi Regency.

Also attended by the Head of the Sanitation Office, Bekasi Metro Police Representative, Korem Representative, Chairman of the DPC Laskar NKRI Institute, environmental activists, waste bank management, and those communities who concern about the garbage problem attended the event.

In 2018, clean-up activities was held at the intersection of SGC (Sentra Grosir Cikarang), Cikarang Kota-North Cikarang and 1,329 kilograms of garbage had been collected. This year's waste is to be measured on September 28, 2019. The collected garbage consists of plastic and non-plastic waste.

Agustina Iskandar, Leader of World Cleanup Day Indonesia, emphasized that a shared awareness is needed to solve this problem. Furthermore, the number of illegal dumping points in Indonesia has reached more than 4,000 points. She is very disappointed with the condition that those places for kids to play in the nature becomes the place for dumping.

Bekasi, which is part of West Java, has also often been found to be a phenomenon of garbage piles both at river and at illegal dumping points. According to the data, there are 100 illegal dumping points (TPS). Those are located in almost 23 sub-districts throughout Bekasi Regency. Have the most illegal TPS are South Tambun, Babelan, West Cikarang, and North Tambun.

Still, Aldo said, even though the WCD event is held only once a year, it does not mean our garbage pickup action is limited, hoping that this activity can give a message of awareness to the public about the garbage problem in their respective environments.

To succeed in this action, DLH also invited all levels of society and also the communities that are spread throughout the Bekasi District. Because the waste problem is not only the responsibility of the Bekasi Regency Government, but also needs the support of all parties including the company.

"This is the first time EJIP took part in an event that was held simultaneously in 157 countries. It is hoped that in the future this waste issue can continue to be raised, and become a serious discussion so that waste management will be even better, so that the  #BekasiBebasSampah2025 target is not just a daydream. We Take Care of Nature, Take Care of Nature. "Said Saidi, Head of CSR Section at the EJIP Region.

It was also seen that many volunteers from vocational and high schools in Bekasi District participated in the 2019 WCD event. From an early age, our nation must start to realize importance of clean, healthy and comfortable environment. In addition, by cooperating with people from various parties and backgrounds, the World CleanUp Day together with the Bekasi District Ecovillage Anchor is expected to be a momentum of unity for everyone to do good for the environment.

In the pandemic of Covid-19, PT EJIP still distribute Qurban donations to the Sukaresmi’s community, on Eid al-Adha, as many as 6 cows and 14 goats.